On November 13, 2009, the DMR and Matthews Marine were met at the South end of FH-12 for the deployment of a large Hopper Barge bearing the numbers ATM2016. The barge is estimated at 12′ Tall, 195′ long, and 35′ wide. The barge was previously being used by Matthews Marine for the deployment of Limestone and Crushed Concrete. During one of her deployment efforts, the Barge buckled at the Center terminating its usefulness. Matthews Marine then donated the Barge as a Reef. Conditions were good with light NE winds @ 5 knots, Tide was at 0.8′, the surrounding depth was 42′ with a minimum depth of 27′ recorded. Water flow started about 8AM and she finally yielded to the bottom at about 1130AM. The Bow is facing approximately 300°. 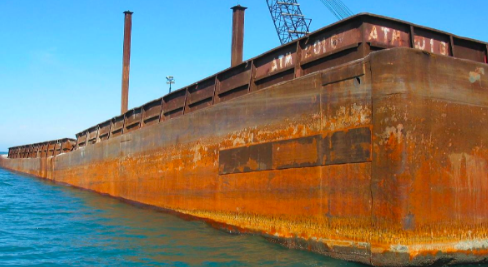